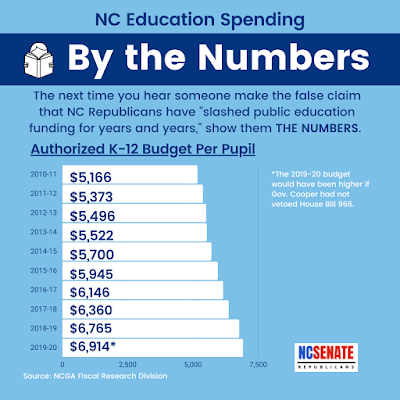 Yesterday, the far-left N.C. Association of Educators (NCAE), which is aligned with Gov. Roy Cooper, sued to eliminate the Opportunity Scholarship program that helps low- and middle-income families afford private schooling. Gov. Roy Cooper has said for years that he wishes to defund the program.
A much higher proportion of Opportunity Scholarship applicants are Black (35%) than the proportion served by the public school system (25%). Polling consistently shows massive support for school choice, especially among Black respondents.
Programs like the Opportunity Scholarship empower parents with a choice in their children's education. The N.C. Supreme Court has already ruled that the Opportunity Scholarship program is Constitutional, and the U.S. Supreme Court recently ruled that public funds can go to private schools.
Sen. Deanna Ballard (R-Watauga), who co-chairs the Senate Education Committee, said, "The far-left NCAE says it cares about equity in schooling, but it's suing to ensure low-income families can't afford to send their children to private school. Nobody disputes that children will suffer from public school closures, yet this suit would strip low-income children of the only chance they have to attend private schools, which are open for in-class instruction."
The evidence showing harm from school closures to at-risk children is overwhelming. If successful, the far-left NCAE's suit would restrict access to private, in-person instruction to only children from wealthy families. Eliminating Opportunity Scholarships would have a disparate impact on low-income communities and communities of color.
As a reminder, Republicans have increased public school funding by large amounts since coming into power in 2011. Education funding in North Carolina has increased by $968 per student in just four years, and $1,748 per student in nine years