“Whose Hand Shall Write It, Whose Tongue Shall Utter It?” 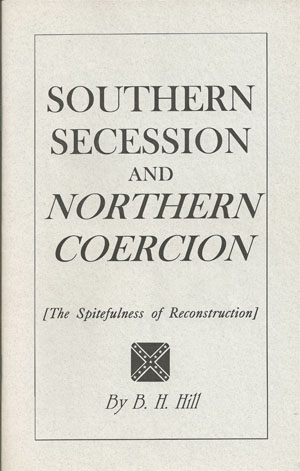 I used to recite a part of his speech The New South: in front of the Marshall, VA UDC. Starting with "Dr. Talmage has drawn for you, with a master’s hand, the picture of your returning armies"


Senator Benjamin H. Hill of Georgia, one of the last to accept the secession of his State in 1861, proved himself to be the last to give up the hope of establishing that secession. After Lincoln’s election in November 1860, Hill pleaded that the Union not be abandoned to its enemies by withdrawing. He asked: “Is this Union good? If so, why should we surrender its blessings because Massachusetts violates the laws of that Union? Drive Massachusetts to the duties of the Constitution or from its benefits . . . Let us defend the Union from its enemies – not abandon it to them.”

On March 11, 1865, he delivered what has been designated “the last speech made by any Southern man in behalf of the Confederacy.”