Here's to the Land of the Longleaf Pine..... 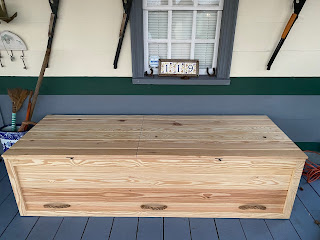 I used to recite the poems to my daughters, how many times I do not know. :)

........The summer land where the sun doth shine,
Where the weak grow strong and the strong grow great,
Here’s to “Down Home,” the Old North State!

Here’s to the land of the cotton bloom white,
Where the scuppernong perfumes the breeze at night,
Where the soft southern moss and jessamine mate,
‘Neath the murmuring pines of the Old North State!

Here’s to the land where the galax grows,
Where the rhododendron’s rosette glows,
Where soars Mount Mitchell’s summit great,
In the “Land of the Sky,” in the Old North State!

Here’s to the land where maidens* are fair,
Where friends are true and cold hearts rare,
The near land, the dear land, whatever fate,
The blest land, the best land, the Old North State!

O I'm a good old rebel, Now that's just what I am. For this "fair land of freedom" I do not care a damn. I'm glad I fit against it, I only wish we'd won, And I don't want no pardon For anything I done.

I hates the Constitution, This great republic too, I hates the Freedmans' Buro, In uniforms of blue. I hates the nasty eagle, With all his braggs and fuss, The lyin' thievin' Yankees, I hates 'em wuss and wuss.

I hates the Yankees nation And everything they do, I hates the Declaration, Of Independence, too. I hates the glorious Union- 'Tis dripping with our blood- I hates their striped banner, I fit it all I could.

I followed old mas' Robert For four year near about, Got wounded in three places And starved at Point Lookout I got the rheumatism A campin' in the snow, But I killed a chance o'Yankees I'd like to kill some mo'.

I can't take up my musket And fight 'em now no more, But I ain't going to love 'em, Now that is sarten sure, And I don't want no pardon For what I was and am. I won't be reconstructed, And I don't care a damn.