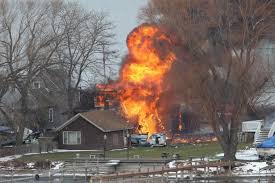 An ex-con gunned down two firefighters after luring them to his neighborhood by setting a car and a house ablaze early Monday, then took shots at police and committed suicide while several homes burned.

Authorities used an armored vehicle to help residents flee dozens of homes on the shore of Lake Ontario a day before Christmas. Police restricted access to the neighborhood, and officials said it was unclear whether there were other bodies in the seven houses left to burn.

The gunman's sister, who lived with him, was unaccounted for. The gunman's motive was unknown.
William Spengler fired at the four firefighters when they arrived shortly after 5:30 a.m. at the blaze in Webster, a suburb of Rochester, town police Chief Gerald Pickering said. The first police officer who arrived chased the gunman and exchanged shots.

Spengler lay in wait outdoors for the firefighters' arrival, then opened fire probably with a rifle and from atop an earthen berm, Pickering said.

"It does appear it was a trap," he said.

Spengler had served more than 17 years in prison for beating his 92-year-old paternal grandmother to death with a hammer in 1980 at the house next to where Monday's attack happened, Pickering said. Spengler, 62, was paroled in 1998 and had led a quiet life since, authorities said. Convicted felons are not allowed to possess weapons.