The Next American Civil War 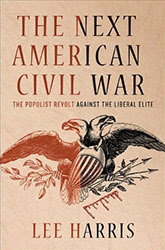 “Tyrants preserve themselves by sowing fear and mistrust among the citizens by means of spies, by distracting them with foreign wars, by eliminating men of spirit who might lead a revolution, by humbling the people, and making them incapable of decisive action…” ... Aristotle

You’d think ole “Ari” might have been peering through some sort of cosmic window into modern day America some 2300 years ago with comments such as those above.

There’s another way to look at it, as well.  One can grudgingly admit that the Greeks, of 2300 years ago, were smarter than modern Americans.  In my estimation—you’d be right.  So, I tend to go with the latter explanation.

See, America is building a head of steam preparing to go to war with itself a second time at this very moment.  This is not unusual—not in America.  We have already had two revolutions.  You may recall the American Revolution against Great Britain and the second—the War for Southern Independence, often erroneously referred to as the American Civil War, or the War Between the States.

Tensions are running high all across the country as citizens are rushing to arm themselves with the closest thing resembling combat weaponry they can possibly find. Ammunition of all calibers is disappearing from the shelves of gun shops and back orders at the manufacturing plants are piled high.

Look.  Nobody really knows how many guns are in the hands of private citizens in America.  Many have multiple weapons.  A few are even registered, but, my guess is—the vast majority are not registered anywhere for exactly the reason Americans feel they are being driven, herded, as it were,  to armed resistance.  Of the weapons known to be in the hands of private civilian Americans there are enough, according to some reports, to arm every man woman and child in America today—well over three hundred million.

That’s a lot of guns, but not nearly as many as there will be in 2013.  Manufacturers are finding it impossible to keep up with demand for their guns.