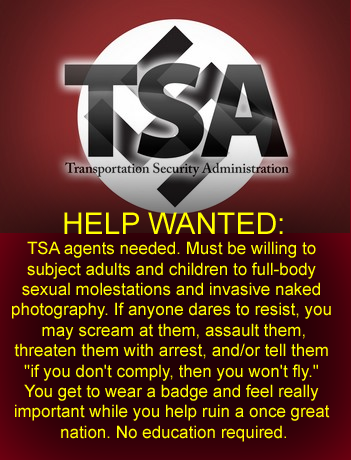 The Transportation Security Administration (TSA) is tightening its grip on domestic travcel. I don't mean the random, unpredictable security checks at bus, subway and train stations which already exist. I mean a coordinated and systematic police control of internal travel within America. Groundwork is being laid.


Application to Make U.S. Into an Airport Screening Zone

The application was tucked away on page 71431 of Volume 77, Number 231 of the Federal Register (November 30). It was surrounded by soporific references to forwarding "the new Information Collection Request (ICR) abstracted below to the Office of Management and Budget (OMB) for review and approval under the Paperwork Reduction Act (PRA)."


The application for funding from the TSA constitutes a preliminary step toward systematically expanding TSA's authority from airports to highways and almost every other means of public travel. The expansion would erase one of the last remaining differences between the US and a total police state; namely, the ability to travel internally without being under police surveillance. The total police state you experience at airports wants to spill into roads and bus stops, to subways and trains. Or, rather, the TSA wants to solidify and spread the fledgling and erratic presence it already has.