Boehner Telling Reid To “GFY”? Not A Big Deal 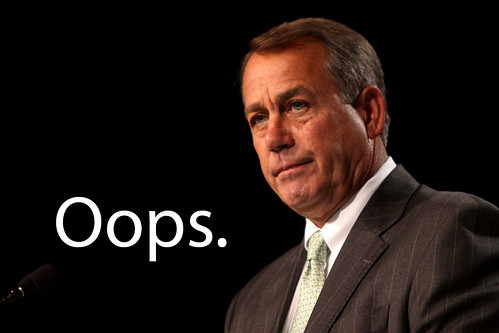 For all the complaints we conservatives have about Speaker John Boehner, there can be no denying that we felt a certain camaraderie with him, a certain pride that he is on our side, at least in party affiliation, when we learned that he told Senate Majority Leader Harry Read to “Go f*** yourself”–twice–after Harry Reid likened him to a dictator.


“John Boehner seems to care more about keeping his speakership than about keeping the nation on firm financial footing,” said Reid, adding that the House was “being operated with a dictatorship of the speaker.”

Politico reported that Boehner muttered his awesome rebuke the next day, when Boehner saw Reid at the White House.


“Reid, taken aback, said, ‘What are you talking about?’ And Boehner repeated it. Boehner’s office has confirmed the validity of these claims, but offered no further comment on the matter.”

For maybe six seconds after hearing of this incident, I wanted Boehner to run for president. That quickly faded, of course, but it’s still nice to see Boehner have at least some backbone, even if in such a way that’s irrelevant to his leadership.

But whenever a Republican does something classless–and I don’t deny it was classless of Boehner to tell Reid to self-mate–liberals suddenly become virgin-eared nuns.


“Go F” was trending on Twitter Wednesday morning, with liberals reporting on the matter and then editorializing that it was “unprofessional” of Boehner, or saying sarcastically that it was “real classy.”

When President Obama was signing his healthcare legislation and Joe Biden muttered loudly into his ear and into the microphone, “This is a big f***in’ deal,” liberals thought it was the greatest thing they’d ever heard. There was no sniveling from the left about Biden’s lack of professionalism.

The difference is that Boehner was not in a congressional session–it was overheard by others, but it was still a private conversation. Joe Biden was in a professional environment, an official ceremony of sorts. Not that I care either way; I don’t.

But even more unprofessional and classless than Biden’s BFD moment and Boehner’s GFY moment was when Obama’s campaign website decided it prudent to sell t-shirts to capitalize on the crassness.

Now if the Republican National Committee starts printing and selling t-shirts that read something along the lines of “Hey, Reid, GFY!” then I’ll complain about that. But a private moment between two individuals? Get over it.
Posted by Brock Townsend at Thursday, January 03, 2013