Mamet: Hands Off My Gun 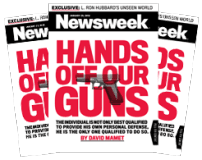 The individual is not only best qualified to provide his own personal defense, he is the only one qualified to do so.

‘In announcing his gun control proposals, President Obama said that he was not restricting Second Amendment rights, but allowing other constitutional rights to flourish.’

For the saying implies but does not name the effective agency of its supposed utopia. The agency is called “The State,” and the motto, fleshed out, for the benefit of the easily confused must read “The State will take from each according to his ability: the State will give to each according to his needs.” “Needs and abilities” are, of course, subjective. So the operative statement may be reduced to “the State shall take, the State shall give.”