The Pretender and His Minions 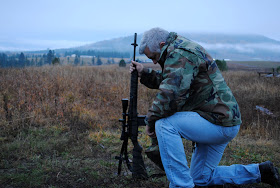 Paratus Familia
VERBATIM
I have to admit it - I miss the good old days.  You know the ones - the days when we spent time cataloging our gear and equipment, testing new survival skills and preparing for every "what if" we could think of.  Back in those days, life was pretty secure.  Everything we planned for was in some unknown future.  We had time.  We could live life to its fullest as we prepared for future uncertainty.  Survivalism was a hobby.

Sometime, when we weren't looking, that "unknown" future caught up with us.  And it isn't pretty.  Suddenly (or not so suddenly), we have been thrust into the reality of a nation that is spiraling the drain, not only economically, but also morally.  A pretender is on the throne and his minions are at our door.  And we have flung the door wide open.

We are no longer dealing with a theoretical, "what if" scenario - we are now balancing precariously on the precipice of a full-fledged, all-out battle.  And the resounding clash of arms is getting closer.  Truth be told, gun stores and gun shows aren't being sold out because people think there is a gun ban coming - they are being sold out because the United States population is gearing up.  People aren't running scared - they are preparing for insurrection.

The battles we are facing are not battles against flesh and blood, but against powers and principalities.  We are not fighting to keep our guns or choose if we want to vaccinate our children, we are battling to live our lives as free men - "So then, brethren, we are not children of a bondswoman, but of the free woman" Galatians 4:31.

The enemy has breached the gate - are you ready for the battle?


"....choose you this day whom ye will serve; whether the gods which your fathers served that were on the other side of the flood, or the gods of the Amorites, in whose land ye dwell; but as for me and my house, we will serve the Lord".
Joshua 24:15
Posted by Brock Townsend at Sunday, February 03, 2013