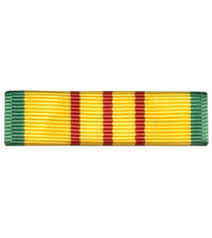 For conspicuous gallantry and intrepidity at the risk of his life above and beyond the call of duty as Acting Platoon Leader, First Platoon, Company K, Third Battalion, Fourth Marines, Third Marine Division, in the Republic of Vietnam on 18 July 1966. Second Lieutenant (then Staff Sergeant) McGinty's platoon, which was providing rear security to protect the withdrawal of the battalion from a position which had been under attack for three days, came under heavy small arms, automatic weapons and mortar fire from an estimated enemy regiment.

With each successive human wave which assaulted his thirty-two-man platoon during the four- hour battle, Second Lieutenant McGinty rallied his men to beat off the enemy. In one bitter assault, two of the squads became separated from the remainder of the platoon. With complete disregard for his safety, Second Lieutenant McGinty charged through intense automatic weapons and mortar fire to their position. Finding twenty men wounded and the medical corpsmen killed, he quickly reloaded ammunition magazines and weapons for the wounded men and directed their fire upon the enemy.

Although he was painfully wounded as he moved to care for the disabled men, he continued to shout encouragement to his troops and to direct their fire so effectively that the attacking hordes were beaten off. When the enemy tried to out flank his position, he killed five of them at point-blank range with his pistol. When they again seemed on the verge of overrunning the small force, he skillfully adjusted artillery and air strikes within fifty yards of his position.

This destructive fire power routed the enemy, who left an estimated 500 bodies on the battlefield. Second Lieutenant McGinty's personal heroism, indomitable leadership, selfless devotion to duty, and bold fighting spirit inspired his men to resist the repeated attacks by a fanatical enemy, reflected great credit upon himself, and upheld the highest traditions of the Marine Corps and the United States Naval Service.
Posted by Brock Townsend at Sunday, March 31, 2013