Redstone instructor: History of black Confederate soldiers unpopular but must be told 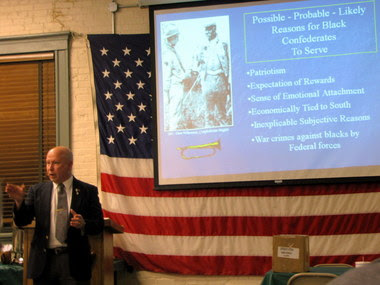 An attempt to squelch a little known part of African American history gave Edwin Kennedy a bigger microphone than he ever imagined 13 years ago.

At the time, he had just seen a history display he helped arranged at Fort Leavenworth, Kan., removed from the Combined Arms Research Library because it was perceived as offensive, Kennedy recalled.

The display, which the command post said lacked historic balance, shared part of the story of blacks who fought for the Confederate army during the Civil War, not as body servants for their owners or impressed cooks and general laborers, but as actual soldiers shouldering muskets.

"It's not politically correct to talk about it," said Kennedy, a retired lieutenant colonel now teaching at the Army Command and General Staff College's satellite campus on Redstone Arsenal, "but you can't ignore it."


Kennedy has had numerous opportunities to talk about black confederate soldiers since 2000, and said he generally gets the most requests during Black History Month, which concludes today. But despite the amount of evidence he produces and similar statements by black historians and descendants of black soldiers, he said there is still strong opposition to accept the truth.