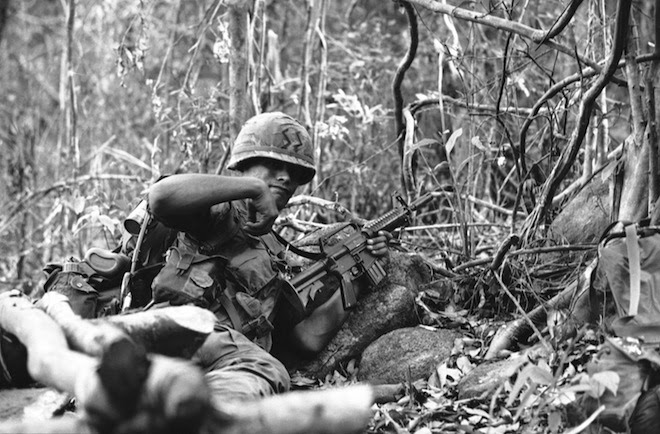 A US paratrooper holding an AR-15 signals to his squad to form a defensive perimeter during a patrol near Duc Pho, 330 miles northeast of Saigon, Vietnam, June 5, 1967. Photo: AP

I was shaking as I shouldered the rifle and peered through the scope at the small steel target 100 yards downrange. It was officially the coldest day in Las Vegas history, and I was in the middle of the desert, buffeted by wind and surrounded by the professional gun press, about to fire an AR-15 for the first time.

I grew up with guns, and I even own a small .22-caliber target pistol that I take to the range occasionally. But I had fired a rifle maybe twice in the past five years. I was a novice, and I was frozen to the core. I flinched as I pulled the trigger the first time, sending my shot wide of the mark.

But the recoil wasn't nearly as bad as I had feared; in fact, the shot was actually pleasant. I fired again with more confidence, and the bullet rang the distant steel plate like a bell; then the next shot hit, and the next.

"You're doing great," said Justin Harvel, founder of Black Rain Ordnance and maker of the gun I was shooting.

"Yeah, it's definitely not your daddy's hunting rifle, is it?"