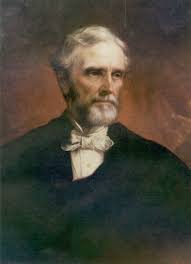 The high-toned statesman serving the public good can clearly be seen in the words and actions of Jefferson Davis, who acted politically from conviction alone.  Describing Lincoln’s Secretary of State, William Seward, President James Buchanan said: “He was much more of a politician than a statesman, without strong convictions; he understood the art of preparing in his closet and uttering before the public, antithetical sentences, well-calculated to both inflame the ardor of his anti-slavery friends and exasperate his pro-slavery opponents….he thus aroused passions, probably without so intending, which it was beyond his power to control.”

Truth Held Subsidiary to an End:

“It was on [a late 1859 visit to an ailing Senator Jefferson Davis] that [William Seward] said a most remarkable thing to me. We were speaking of the difficulty men generally had in doing themselves justice [in public speaking], if not cheered on by the attention and sympathy of the audience. Mr. Davis remarked, “I lose much of the vigor of my thoughts when the audience is inattentive or seems “ill at ease.”

Mr. Seward said, “I do not, it is rather a relief to me to speak to empty benches.” I exclaimed, “Then, whom do you impersonate?” “The papers,” said he, “I speak to the papers, they have a much larger audience than I, and can repeat a thousand times if need be what I want to impress upon the multitude outside; and then there is the power to pin my antagonists down to my exact words, which might be disputed if received orally.”

Another day he began to talk on the not infrequent topic among us, slavery….[and] I said, “Mr. Seward, how can you make, with a grave face, those piteous appeals for the Negro that you did in the Senate; you were too long a schoolteacher in Georgia to believe the things you say?”

He looked at me quizzically, and smilingly answered: “I do not, but these appeals, as you call them, are potent to affect the rank and file of the North.” Mr. Davis said, very much shocked by Mr. Seward’s answer, “But Mr. Seward, do you never speak from conviction alone?”  “Nev-er,” answered he. Mr. Davis raised up his…head, and with much heat whispered, “As God is my judge, I never spoke from any other motive.”

After this inscrutable human moral, or immoral, paradox left us, we sat long discussing him with sincere regret, and the hope that he had been making a feigned confidence to amuse us. He [Seward] frankly avowed that truth should be held always subsidiary to an end, and if some other statement could subserve that end, he made it. He said, again and again, that political strife was a state of war, and in war all stratagems were fair.”