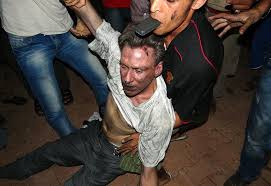 An al Qaeda terrorist stated in a recent online posting that U.S. Ambassador to Libya J. Christopher Stevens was killed by lethal injection after plans to kidnap him during the Sept. 11 attacks in Benghazi went bad.

The veracity of the claim by Abdallah Dhu-al-Bajadin, who was identified by U.S. officials as a weapons expert for al Qaeda, could not be determined. However, U.S. officials have not dismissed the terrorist’s assertion.

An FBI spokeswoman indicated that the bureau is aware of the claim but declined to comment because of the ongoing investigation into the Benghazi attacks.

“While there is a great deal of information in the media and on the Internet about the attack in Benghazi, the FBI is not in a position at this time to comment on anything specific with regard to the investigation,” spokeswoman Kathy Wright said.