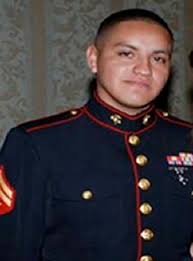 The FBI is searching for a U.S. Marine reservist who served in Iraq, his father and uncle after they were kidnapped at a ranch in Mexico last month, authorities said on Tuesday.


The FBI has asked for the public's help to locate U.S. Marine Armando Torres III, who was taken with his father Armando Torres II and his uncle Salvador Torres on May 14 in La Barranca, Mexico, near the southern tip of Texas.

The FBI says it is working with Mexican law enforcement agencies to locate Torres, a U.S. citizen, and the two older men, who are both Mexican citizens.

Investigators in Mexico say a property dispute over the partial sale of the ranch may have triggered the kidnapping.


Armando Torres III drove into Mexico on May 14 to visit his father's ranch, the FBI said in a statement. Shortly after his arrival, gunmen entered the property and kidnapped the three Torres men, who have not been heard from since.