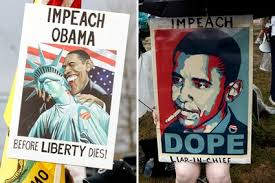 To: All members of the U.S. Congress:

Whereas, President Barack Obama not only failed to aid U.S. personnel under lethal and prolonged terrorist attack in Benghazi, Libya, on Sept. 11, 2012, resulting in the deaths of a U.S. ambassador and three other Americans, but also led an outrageously deceitful cover-up for weeks afterward, rivaling the Watergate-era cover-up that ended the presidency of Richard Nixon;

Whereas, the IRS under Obama – in accord with direct instructions from congressional Democrats – has engaged in the most egregious and widespread attack on conservative groups in modern history, with the knowledge of top agency officials;

Whereas, the Obama Justice Department, on top of its many first-term scandals, has spied on and harassed journalists at Fox News and the Associated Press, prompting widespread, bipartisan condemnation of the DOJ for “criminalizing journalism”;

Whereas, top constitutional attorneys from across the political spectrum now agree that Obama has committed certain specific offenses that unquestionably rise to the level of impeachable “high crimes and misdemeanors”;

Whereas, one of these offenses – that of illegally conducting war against Libya – has been deemed by a bipartisan panel of constitutional experts to be “clearly an impeachable offense” and “gross usurpation of the war power”;

Whereas, Obama’s policy of targeted assassinations of U.S. citizens without any constitutionally required due process – including the drone assassination of an American-born 16-year-old as he was eating dinner – is unanimously deemed by experts, both liberal and conservative, as “an impeachable offense”;

Whereas, Obama’s Justice Department has presided over the disastrous “Fast and Furious” operation in which approximately 2,000 firearms were directed from U.S. gun shops across the U.S.-Mexico border and into the hands of members of Mexican drug cartels, resulting in the deaths of as many as 100 people, including U.S. Border Patrol Agent Brian Terry – a scandal that constitutional experts agree constitutes, at a minimum, clear grounds for impeaching Attorney General Eric Holder;

Whereas, Obama has – in clear-cut violation of his oath to “take care that the laws be faithfully executed” imposed by Article II of the Constitution – refused to defend the Defense of Marriage Act, which was passed into law in 1996 under President Bill Clinton;

Whereas, Obama usurped the authority of Congress by issuing an executive order in June 2012 declaring that illegal immigrants who were brought to the U.S. before they turned 16 and who are younger than 30 would not be deported – essentially duplicating the DREAM Act which failed to pass in Congress;

Whereas, Obama made several recess appointments in January 2012 while the Senate was still officially in session, actions the U.S. Court of Appeals for the District of Columbia Circuit recently ruled violated the Constitution because they weren’t made when the Senate was in recess;

Whereas, numerous other constitutional outrages characterize Obama's presidency – from his administration’s abuses of citizens’ civil rights under cover of the PATRIOT Act; to the Obama Justice Department’s refusal to prosecute the worst case of voter intimidation in modern times, perpetrated by club-wielding New Black Panthers; to Obama’s appointment of more than 30 unelected “czars” to positions in federal agencies when the Constitution requires such appointments be vetted by Congress; and other instances of clear contempt for Congress, the Constitution and the American people:

Therefore, we the undersigned urge Congress to immediately undertake a full and impartial investigation into the many blatantly unconstitutional actions of Barack Obama. For members of Congress, each of whom has also sworn a solemn oath to uphold the Constitution, to allow a president to routinely flout the Supreme Law of the Land without being held accountable is equally repugnant to a free country and a free people.
Posted by Brock Townsend at Wednesday, June 05, 2013