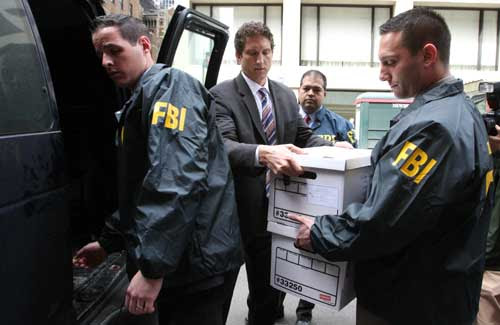 Within hours of publishing a scathing story on President Obama (http://wp.me/p3dd01-Yp) the DOJ raided the offices of the National Report claiming the raid was lawful under the USA Patriot Act but refusing to say why the government was taking the action.

At about 12:50 this afternoon the National Report released a damning story on the Obama birth certificate scandal providing new evidence which clearly shows the document to be fraudulent. According to Sheriff Joe Arpaio, his Cold Case Posse has the evidence to prove the presidents birth certificate was computer generated using Adobe Illustrator.

Cold Case Posse lead investigator Mike Zullo, revealed for the first time that his findings have been confirmed in a 40 page report by Reed Hayes, a Certified Documents Examiner (CDE) from Hawaii. The birth certificate posted to the White House website clearly shows it was forged using cut & paste methods in several layers.

At about 2:08 pm employees at the National Report were shocked when dozens of black clad machine gun toting DOJ agents wearing black masks entered the National Report office forcing everyone to the ground while demanding they put their hands on top their heads. After securing all employees FBI agents entered and began questioning employees and seizing files and other documents.

“We did exactly as they told us,” said National Report’s publisher Allen Montgomery, who added “No one knew what was happening.” Its being reported that the offices of Montgomery and Editor-in-Chief Nigel Covington, were ransacked and boxes of files were seized and carted off by FBI agents.

Covington said, “This is a gross violation of our Constitutional rights as American citizens and as journalists. All our files relating to President Obama were seized with others including all employee personnel files.”