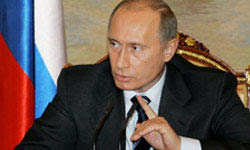 Russian President Vladimir Putin said chemical laboratories in Iraq are producing chemical weapons for the terrorists in Syria, confirming a detailed report by Far News Agency (FNA) last month which said former Ba'ath regime officials are involved in the production and procurement of such weapons to the Syrian terrorists.

"We know that Opposition Fighters were detained on Turkish territory with chemical weapons," Mr. Putin told a press conference in Lough Erne, Northern Ireland after meeting the leaders of the industrialized nations in a G8 Summit.

"We have information out of Iraq that a laboratory was discovered there for the production of chemical weapons by the opposition. All this evidence needs to be studied most seriously," he continued.

Putin questioned the credibility of allegations by the US, UK and France that Syrian President Bashar Al-Assad's forces had used chemical weapons, and attributed equivalent horrors to the forces supported by the West.