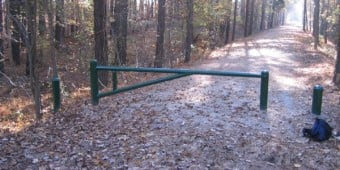 Black-mob violence and black-on-white crime has not destroyed the entire American Tobacco Trail, only the small chunk that goes through Durham, N.C.

The “high crime” part. The gang-infested part. The poor part. The urban part. The sketchy part. The part that local media calls every name imaginable except one: The black part.

Otherwise, most of the 22.5 miles of this trail is a safe, sometimes bucolic experience for runners, bikers, strollers and even equestrians. As long as they stay away from the trail near Martin Luther King Jr. Parkway.

Since 2011, dozens of people have been beaten, robbed, pushed off bikes and threatened in that part of the trail. All of the suspects in this violence and mayhem are black.

Though most of the time the local media is loathe to say so. In the most recent assault, WRAL-TV described one of the assailants as having a “dark complexion.”