Suicide bomb attack on an historic church in Pakistan kills at least 75. 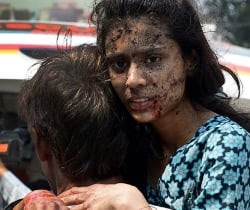 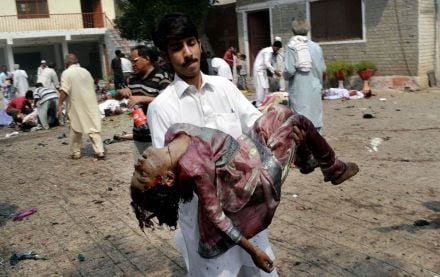 Hundreds more were injured in the attacks that began midday yesterday in Nairobi, Kenya.

The latest attack this morning in Peshawar, Pakistan, occurred as hundreds of worshipers were coming out of the church in the city’s Kohati Gate district after services to get a free meal of rice offered on the front lawn, said a top government administrator, Sahibzada Anees.

“There were blasts and there was hell for all of us,” Nazir John, who was at the church with at least 400 other worshipers, told the Associated Press. “When I got my senses back, I found nothing but smoke, dust, blood and screaming people. I saw severed body parts and blood all around.”

Blood stained the floors and white walls of the All Saints Church in the worst church attack in the country’s history. The floor was littered with bodies and plates of rice.

The suicide bombers detonated their explosives almost simultaneously, said police. Authorities were recovering body parts in a grisly effort to identify the victims and their ages.

The blasts killed more than 60 people and wounded 120, said Arshad Javed, top health official at the hospital in Peshawar where the victims were being treated. The dead included several women and children, said Sher Ali Khan, another doctor at the hospital.

The hospital ran out of caskets and beds for the wounded.