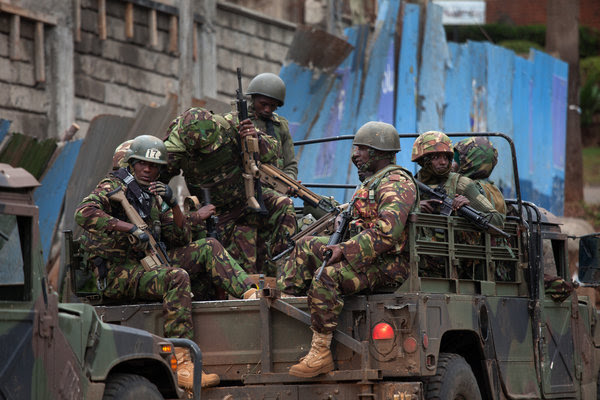 The Kenyan government on Sunday night appeared ready to storm Shabab militant attackers holed up in a mall for more than a day, seeking to end a siege that has shaken the nation and left dozens dead.


As helicopters circled the Westgate mall in Nairobi, the National Disaster Operation Center said on Twitter Sunday evening after sunset: “Godspeed to our guys in the Westgate building. Major engagement ongoing. Sporadic gunfire.”

“Kenyan forces who’ve just attempted a roof landing must know that they are jeopardising the lives of all the hostages at #Westgate,” read a Twitter post attributed to the Shabab on Sunday night. “The Kenyan government shall be held responsible for any loss of life as a result of such an imprudent move.”

It was unclear the extent or goals of the incursion. At least four explosions could be heard Sunday night near Westgate, though the area was cordoned off.

Earlier in the day, the Kenyan president, Uhuru Kenyatta, addressed the nation urging patience and expressing sorrow atloss of life.