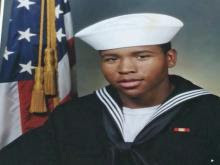 The family of Errol Williams gathered to mourn and pray Monday, a day after the 27-year-old father of two was gunned down.

Fayetteville police are searching for the men who robbed Williams early Sunday at a Bragg Boulevard Kangaroo, forced him into his car and shot and killed him just blocks away.

"It's horrible to take somebody's life like that, over nothing," Williams' sister, Sadie Everett, said Monday.

Everett is sure her brother would have cooperated with his attackers, and she said she thinks they killed him because he had seen their faces.

Within hours of the crime, much of North Carolina had seen the suspects, too. Fayetteville police released surveillance images and video from the gas station, at 5642 Bragg Boulevard, in hopes that someone would come forward to identify the culprits.