Hidden for Half a Century: The 1940 Barn Dodge! 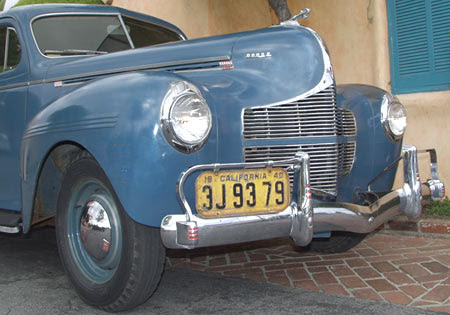 You have heard stories of barn finds before. Some sound incredible, some unbelievable. But here's one that might top 'em all. It's the true story of one 1940 Dodge Deluxe Sedan.


Back in 1940, life in the Country was running at a different pace. You could leave your house unlocked, and, of course, your car. Television and graffiti were words without meaning. Pearl Harbor was an event of the future. It would take two more years until the United States would enter World War II.


At about this time VIN *30231403* was built by proud American workers in Detroit, Michigan, one of 84,976 Dodge D-14 DeLuxe four-door sedans manufactured in 1940. A veterinarian from Horseshoe Bend, Idaho, purchased the blue Dodge new at the local Dodge dealer in Boise.

He used it to respond to calls all through the war years; his 1944 permit is still affixed to the windshield. Being a very valuable asset during war times, the car was always parked in a dedicated spot in the barn when not in use. In 1948, the good Doctor passed away. The car was put on blocks and covered with bed sheets. No, it was not going to be for sale.

Who would have guessed at that time that the Dodge would be asleep for more than 50 years . . .