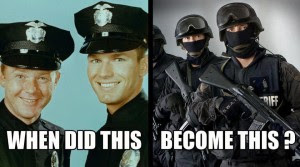 All cops are bad – by definition.


Harsh statement? Certainly. It does not make it less true – like an accurate terminal cancer diagnosis. Pretending otherwise doesn’t alter the reality.

Whether the cops themselves are conscious of their badness is immaterial.

No doubt, many cops (as distinct from peace officers) believe in their hearts (and perhaps even their minds) that they are “good men” doing righteous work.

It does not make it so.

The average Nazi functionary was not a frothing fanatic, either. He was a good German with a wife and kids he doted on, who – in his own mind – believed he was doing the right thing.