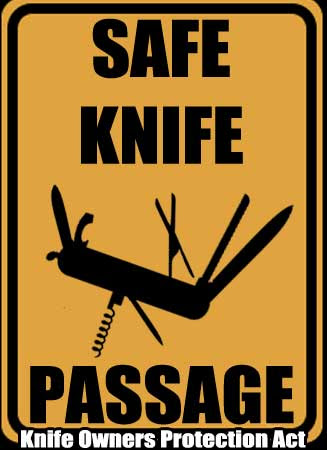 
Knife Rights Chairman Doug Ritter explained, “having KOPA bills in both houses of Congress was a key Knife Rights strategy from the start, increasing the chances for legislative success. Accomplishing this without substantive differences between the two bills further enhances the likelihood that the law eventually enacted will accomplish fully our goal of protecting America’s knife owners.”

The text of S.1955 should become available online next week.
The result of three years of effort, Knife Rights conceived, drafted and developed the Knife Owners’ Protection Act as the first proactive pro-knife federal legislation introduced in the nation’s history.


Ritter concluded, “This legislation will solve a real and growing problem that faces every knife owner traveling throughout America–the threat of arrest and prosecution under misguided local laws merely for possessing knives during lawful travel.”