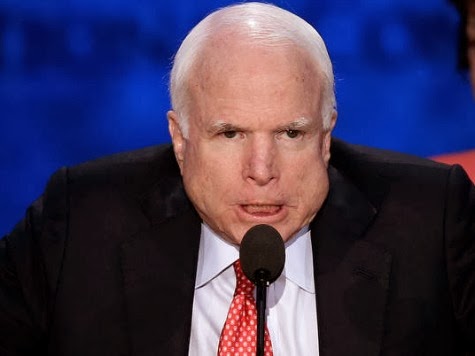 The delegation of Syrian clergy came to Washington to raise awareness among lawmakers of the growing crisis among the region’s minority Christian community. Christians make up about 10% of the Syrian population and they are being targeted and ruthlessly murdered by radical elements of the rebel forces, according to the visiting church officials. They say the media and human rights groups in the west have been largely silent on the ordeal of the Christians in Syria.

A number of churches have been destroyed or burned, children were killed when rebels fired mortar rockets at an Armenian Christian school in Damascus and countless others have been abducted by Islamic fighters, the Syrian delegation reveals in a statement published by the research group, Westminster Institute, that brought them to Washington. Eleven nuns have also been abducted and are still in captivity and two bishops are still missing after getting kidnapped during a humanitarian mission.

But Senator McCain, an Arizona Republican, evidently doesn’t want to hear negative stories about the rebels he’s working to arm. So he stormed out of a closed-door meeting with the Syrian clergy officials last week.