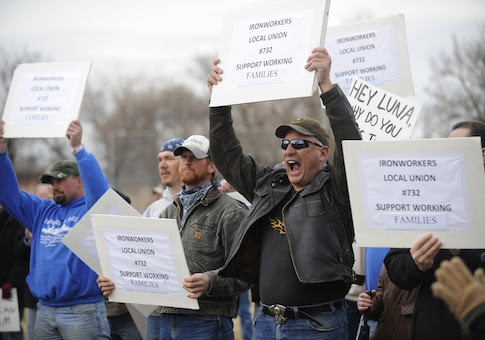 The federal government on Tuesday indicted multiple union members for burning down a Quaker church in 2012.

Ten members of a Philadelphia ironworkers union face charges of arson and racketeering in connection with a fire against the church, which was employing non-union workers.

“Ironworkers Local 401 [was charged] with allegedly participating in a conspiracy to commit criminal acts of extortion, arson, destruction of property, and assault in order to force construction contractors to hire union ironworkers,” the FBI said in a press release. “Specifically, the indictment charges RICO conspiracy, violent crime in aid of racketeering, three counts of arson, two counts of use of fire to commit a felony, and conspiracy to commit arson. Eight of the 10 individuals named in the indictment are charged with conspiring to use Ironworkers Local 401 as an enterprise to commit criminal acts.”