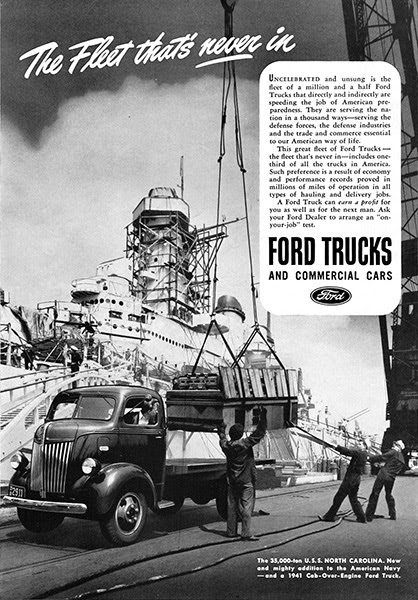 The USS North Carolina, BB-55, so drop-dead gorgeous she was nicknamed The Showboat, was commissioned in April of 1941 and served with distinction in every major Pacific Theatre action. During the Battle of the Eastern Solomons her volume of fire was so heavy the carrier Enterprise asked if she were on fire.

She was hit with a torpedo off Guadalcanal, punching a thirty-two foot hole in her hull below the waterline, but was fully back in action in less than six minutes. The North Carolina was decommissioned in 1947 and is on display at Wilmington, North Carolina. [

photo 1988] The name is now carried by the nuclear attack submarine USS North Carolina, SSN-777, commissioned in 2008. A worthy successor, but no one calls her The Showboat.

Since the first of the year pork is up 45%, (We're going to lose about $3 on the $20 PATCON ticket this time. BT) corn and wheat are up 14%, coffee is up 42%, and cheese is up 21%. All grain-fed livestock, chicken included, are up and so are eggs and dairy products. Vegetables are taking out all time highs. Even the determinedly inattentive have to notice the weekly increase in their grocery bill.

Uninsurance insurance
You're not getting what is commonly known as “insurance.” You're getting a massive bill to pay for other people's chiropractors, marriage counselors, birth control pills, smoking cessation programs, “preventive care” appointments and pre-existing conditions. Health insurance has been outlawed, replaced with a welfare program that has been renamed “insurance.” It doesn't matter if you've been paying for insurance your whole adult life. That policy is now “illegal.”  Put your hands in the air, nice and easy, and step away from the policy, says Ann Coulter in this article, Screw you, Mickey Kaus!, at Human Events.

The world wide party's over - Yes, my loopy progressive friends, the fantasy ride is over. Time to collect the same-sex partners and test-tube kids; get back into the Prius, hope the battery is not dead; and head home to the stagnant economy, the mortgage, the leaky roof, the uncollected garbage, the sky-high energy bills, the unemployed and unemployable college students receiving a DOA education, and a American health care system, once the greatest in the world, now on death's door thanks to your prescriptions. Oh, and let's not forget the misunderstood thugs and terrorists with their knives out, waiting in the driveway to cut all our throats, yes, our—yours and mine.
W. Amselem at thediplomad.blogspot.com

Special consideration shall be given to women and/or minority defined as: Native American, Asian American, Latino, African American and those of the non-Christian faith.
Tom Gantert at michigancapitolconfidential.com

Bill Gates and Common Core - I suspected from the start that Common Core would be a fraud and a failure for a simple reason: it recycled all the bad theories and methods from the last 75 years. If you want to let Bill Gates off the hook, say this: he trusted the wrong people and their bad ideas. The very same people who had dumbed down the schools were now being asked to create a reform program. Oh, really? How could that possibly work?
Bruce Price at americanthinker.com

Remus says - Bill Gates is, among other things, a global warming depopulist. His one and only skill is marketing. There will come a day when his name is routinely mentioned with the worst who have walked among us.

Trivia queston - What is the oldest service cartridge still in use today? The 7.62x54R, still used in Russian GPMG’s and some sniper guns. Over 100 years of service, beating out everything else.
Commander Zero at commanderzero.com

Obama, a sore loser but a loser nonetheless - I think Mr. Obama is making the fool of himself yet again. After all, Mr. Obama is the one who instigated the coup in Ukraine where there was an elected Government. Mr. Obama, his diplomats are recorded and we have recordings of them saying – we’ve got to do something about this Government. And then, when it went against him, he got angry. And I’m afraid he is going to shoot himself in the foot yet again.
Jim Rogers at Voice of Russia, via zerohedge.com

Schiff - It’s not that the stock market is gaining value, it’s that our money is losing value. And so if you have a debased currency, a devalued currency, the price of everything goes up. Stocks are no exception. I think we are heading for a worse economic crisis than we had in 2007. You’re going to have a collapse in the dollar, a huge spike in interest rates, and our whole economy, which is built on the foundation of cheap money, is going to topple when you pull the rug out from under it.
Peter Schiff at etfdailynews.com

For the precious buttercups - Don’t make the world responsible for your emotional well-being unless you enjoy getting hurt.
Scott Shackford at reason.com

Underground - A true survivalist, as apposed to a poser militiaman, has no qualms about hiding out like a frightened little girl, safe from confrontation while the die-off commences around him. Once the population is safely out of the picture, THEN you may emerge and be as violent as your suppressed hostility desires.
James Dakin at jamesmdakin.blogspot.com
Posted by Brock Townsend at Wednesday, April 02, 2014