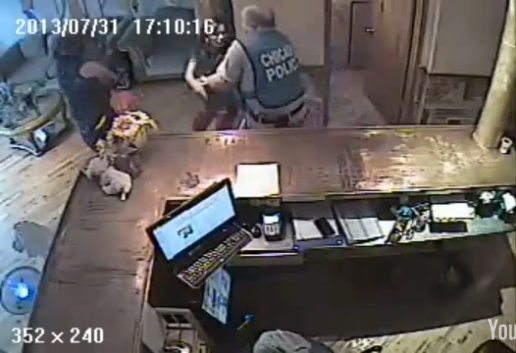 After a police unit raided a tanning salon and massage parlor on the north side of Chicago last summer during a prostitution investigation, things got ugly quickly when they detained a frightened store manager named Jianqing Klyzek.


While Klyzek sat on the floor in handcuffs, an officer then proceeded to strike her from behind, while another threatened to use an electronic taser gun on her “10 f**king times” after which officers threatened Klyzek and members of her family. All the while, a security camera quietly captured the events unfolding.
Footage shows cop ran a stop sign but arrested a sober victim for drunken driving.

“You’re not f**king American! I’ll put you in a UPS box and send you back to wherever the f**k you came from,” one of the officers shouted at Klyzek (an American citizen born in China).

“You’re here on our borrowed time,” he continued. “So mind your f**king business before I shut this whole f**king place down….I’ll take this building. You’ll be dead and your family will be dead,” according to a transcription of the video provided for a federal civil rights lawsuit Klyzek brought against the city of Chicago and its police department on May 14.