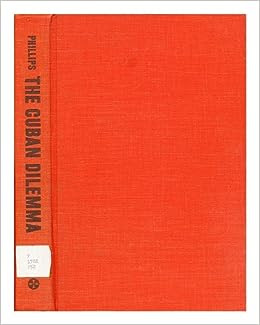 ".........the Communists were unable to brainwash the Southern Negro prisoners they captured in Korea who had been raised in such religious families as you describe.”

The writer of “The Cuban Dilemma” was for twenty-five years the resident New York Times correspondent in Havana, and viewed the transition of power from Batista to Castro first-hand.

Blaming “incredibly inadequate American policy in foreign affairs” for the debacle, she castigated Times colleague Herbert Matthews “whose editorials . . . persuaded the US Government that the bearded revolutionary was a benevolent blend of Abraham Lincoln and Robin Hood.”

“A Senate Internal Security sub-committee, on September 10, 1960, blamed US State Department officials and segments of the American press for helping bring Castro to power. Senators James O. Eastland, Democrat of Mississippi, and Thomas J. Dodd, Democrat, of Connecticut, members of the sub-committee, after hearing testimony of former Ambassadors Earl E.T. Smith and Arthur Gardner said: “Cuba was handed to Castro in the same way China was handed to the communists.”

The two Ambassadors singled out William Wieland, director of the State Department’s Caribbean division, Roy R. Runbottom, Jr., former Assistant Secretary of State for Latin American Affairs, at the time Ambassador to Argentina, and Herbert Matthews of the New York Times.  The Senators charged that the State Department group “misguided the American people.”

When Wieland was in Havana during the Castro revolution, I asked him why the State Department did not tell Batista to stop torturing and killing, either oust his corrupt military men or get out and let the OAS or the UN hold elections.  Wieland insisted that the United States could not “interfere.”

This idea of “social revolution” has a great appeal for our so-called “liberals,” who do not realize that social revolution is the cloak under which the Communists hide.

About that time an old Cuban friend came into the office much excited over a book on Communist brainwashing. He had been a devout follower of Castro and now was completely disillusioned.

“I haven’t read the book,” I said, “but I can tell you the American who is the easiest to brainwash.  It is the educated person who has usually gone through college and is trying to be a liberal.  He is frightened by any talk of conservatism and really doesn’t know what he believes. You were one of them when Castro got hold of you.”

The Cuban grinned and said, “You are right, that is about what the book said. Now tell me, who is the hardest to brainwash?”

“A person, not too well educated perhaps, but one who has been raised by a God-fearing family, who has been taught honesty and respect of property and all the virtues we are supposed to have in the United States.”

“How right you are,” he said.  “The book points out that the Communists were unable to brainwash the Southern Negro prisoners they captured in Korea who had been raised in such religious families as you describe.” Then he added, “There must be something wrong with the American education.”

He was a graduate of one of the United States great universities.”