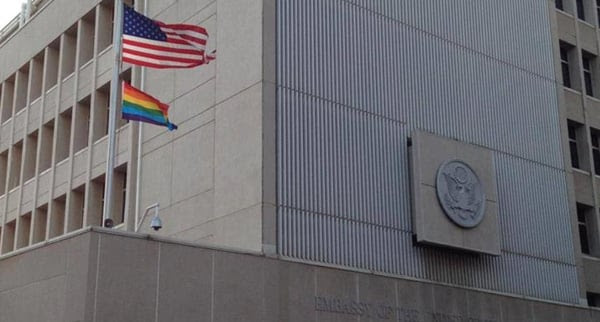 No end of conflict in the Middle East. Palestinians who hate Israel. Jews who don’t trust their neighbors. Al-Qaida members who hate the West. Shariah that designates homosexuals for execution.

Terrorists who seem to hate and want to blow up everybody.

And the message on Thursday from Dan Shapiro, the U.S. Ambassador at the embassy in Tel Aviv?

With the rainbow flag on the flagpole, right there just below Old Glory.

“For the first time in history, the U.S. Embassy in Tel Aviv has raised the Pride flag together with our American flag,” he posted on Facebook, accompanied by a photo of the embassy, and the flag.

“We are proud to join with the municipality of Tel Aviv-Yafo and its residents in celebrating LGBT Pride Week.”

William J. Murray, chairman of Religious Freedom Coalition, said, “How nice. While Obama is suppressing religious liberty at home and abroad – and openly aiding Islamic terrorist groups in Syria, he’s embracing sodomy and celebrating the practice of sodomy at our embassy in Israel.”

This is an abomination and shows just how depraved Obama really is.”