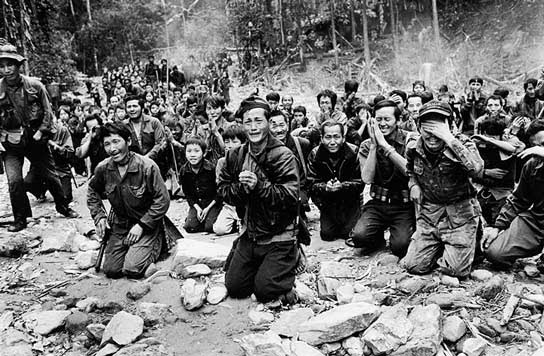 The photograph is of a community of Hmong living in the jungle. When the reporters from TIME came a few years back, the people were overwrought with emotions, supposedly believing that it was the CIA, finally coming back to rescue them after 30 years.

Hmong resistance fighters known as Chao Fa (Cob Fab) continued the fight against the communist.  Lead first by Sayshoua Yang (Xaiv Suav Yaj) then by Pakao Her (Paj Kaub Hawj) in the 1980′s, the fighters lived in the jungles of Laos and received support from the Hmong in Thailand and overseas.  Refusing to acknowledge defeat, these men and their families fought, suffered, and died for a dream that would never be realized.

My ex The Evil One managed an apartment complex before we got together, right about the time the US brought in a lot of the Yards and Hmong that fought for us during Vietnam and she was telling me that within a week after they started moving in they had to replace every oven because they were building fires inside the ovens to cook their food.

My experiences with them were different.

More @ Knuckledraggin' My Life Away
Posted by Brock Townsend at Tuesday, September 30, 2014