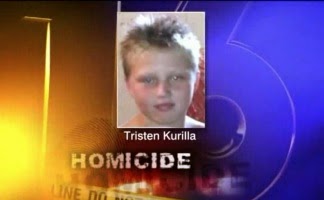 “I killed that lady,” the 10-year-old boy told a Pennsylvania state trooper, after a 90-year-old woman was found dead in the home of the boy’s grandfather. Tristen Kurilla made the chilling confession Saturday, police said, after his mother brought him to the Pennsylvania State Police Barracks in Honesdale, about 140 miles north of Philadelphia.

Now, Kurilla is being held at the Wayne County Correctional Facility and is being charged as an adult with criminal homicide, the Wayne County district attorney’s office said. The boy admitted to grabbing a wooden cane, holding it against 90-year-old Helen Novak’s throat for several seconds and punching her in the throat and stomach, according to the police affidavit.