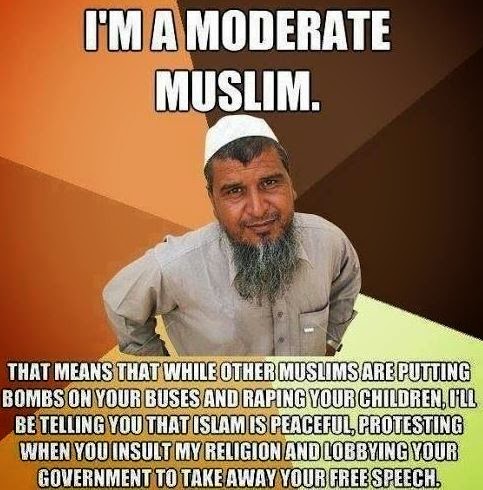 Part 4 of a Series
Mike Scruggs

“Like the Unicorn, we can imagine a moderate Islam, but who can find it?
”—Serge Trifkovic

If we judge by the doctrinal standards of Islam—the Koran and the historical record and teachings of its apostle, Muhammad—there is no real moderate Islam. Islam by the testimony of its own most sacred and revered writings, is not a religion of peace and tolerance, but of coercion, deception, fanatical violence, and Holy War against all who would oppose its absolute power and expanding dominance.

Recently, President Obama claimed that the terrorist group ISIS is not Islamic. What he meant was that he does not believe ISIS holds to the teachings of “True Islam.” However, the President’s ideal of a peaceful and tolerant “True Islam” does not conform well to the Islam of the Koran and the teachings of its founding prophet, Muhammad. The Koran contains over 100 verses that call for violence against non-Muslims, especially Christian and Jews, who reject Islam or oppose its advance. Neither does it conform well to the violent and coercive history of Islam, nor to the continuing stream of terrorist attacks against non-Muslims and secularized Muslims around the world.

Ironically, the only real moderation in Islam is in the Alawite sect of Shia Islam, which makes up about 10 percent of the Syrian population. Syrian President and former London ophthalmologist Bashar al-Assad, his family, and most of the military, government bureaucracy, and commercial leadership belong to the Alawite minority. The Alawites are tolerant of Christianity and have adopted some Christian practices and holidays. They are closely connected commercially and protective of the 10 percent Christian minority in Syria. Because of Alawite secularism and tolerant accommodations to Christianity, the mainstreams of Sunni and Shia Islam consider Alawite Islam heretical and fit for violent extinction. The Assads, like other secularized Muslim political leaders in the Middle East, have long been Muslim Brotherhood targets for elimination.

The so-called Syrian Civil War is only the most recent attempt by the Hamas terrorist and military arm of the Muslim Brotherhood to rid Syria of secularist leadership and Western influence. President Obama has allied the U.S with the so-called “moderates” of the Free Syrian Army—highly infiltrated by vicious Hamas and al-Qaeda fanatics with strong leanings toward an ISIS alliance. The best bet for defeating ISIS in Syria would have been to ally with Assad. Assad, the former London ophthalmologist, is alleged to have been responsible for using poison gas against civilians, but many believe it was a “false flag” operation of al-Qaeda or Hamas. All things considered, President Obama has allied us with the most murderous of the two sides in Syria—as usual with the Muslim Brotherhood and its many financial, political, and propaganda fronts in the U.S.

There is no truly moderate Islam. Being faithful to the Koran and the teachings of Muhammad preclude any reasonable classification as moderate. There are moderate Muslims, but by definition they are not faithful to the Koran and the example of Muhammad. Most moderate Sunni and Shia Muslims are essentially secularized or purely cultural Muslims. In addition, there are many who confess to be Muslims but simply do not know the Koran or the essential teachings of Islam,

Just as not everyone who claims to be a Christian holds the Bible to be the inerrant, infallible, and authoritative Word of God, not everyone who identifies themselves as Muslim holds the Koran and the teachings of Muhammad to be the binding Will of Allah. In fact, many Christians have an alarmingly shallow knowledge of the Bible and its teachings, and many Muslims have only a disconnected understanding of the Koran and the teachings of Muhammad.

A 2013 Pew Research poll indicated that Muslim support for Islamic (Sharia) Law varies considerably from country to country. Sharia law is basically an extension of the Koran and the teachings of Muhammad to all aspects of Muslim life—enforced by Muslim clerics. It is often also the official law embedded in the Constitution of these countries. Sharia law is noted for its severity. Support for it would not be typical of “moderate” Muslims or “moderate” Muslim countries. In Afghanistan, 99 percent of Muslims support Sharia law, which is already embedded in its Constitution with U.S. approval.  Sharia is supported by 74 percent of Egyptian Muslims, where it is also embedded in the Constitution. Only 12 percent of Turkish Muslims would support official Sharia law, but according to People-Press, 31 percent of Turks support suicide attacks on Westerners in Iraq.  According to a 2009 poll, 83 percent of Pakistani Muslims support the Sharia law to stone adulterers. According to A World Public Opinion poll in 2009, 64 percent of Egyptian Muslims believe it is “very important” to stone adulterers (mostly women). Moreover, 78 percent of Pakistani Muslims support killing those who deny the Muslim faith.

Can you still believe the happy-clappy nonsense that “Islam is a religion of peace that has been hijacked by a small minority of radicals”?  Reality ought to convince us of the necessity for rigorously enforced and highly selective immigration laws.
Posted by Brock Townsend at Sunday, November 02, 2014