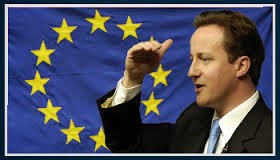 The bloody conflict currently enveloping Ukraine is being portrayed as a civil war between factions loyal to Vladimir Putin's Russian and those who want to break away and form closer ties with the European Union. In reality its a proxy war being fought between the leaders of an expansionist EU who dream of an empire stretching from the "Urals to the Atlantic" and Vladimir Putin who is attempting to preserve whats left of the Russian empire.

A European empire stretching from the Ural Mountains in the east to the Atlantic Ocean in the west did not become EU policy overnight dreamt up with foresight by some benign bureaucrats in a smoke filled backroom over brandy and cigars.

Military campaigns to subjugate the nations of Europe and form an empire have been fought by a variety of armies throughout history including those of the Romans and the Moors but none have codified their ambitions in more detail than Hitler and the National Socialists.

It's worth noting at this point that the Ural mountains are considered historically - and geographically - to be the border where Europe ends and Asia begins.

Hitler's plan for a Grossgermanisches Reich or a Greater Germanic Reich is well documented whereby he envisaged a Jew free, German controlled Europe stretching from the "Urals to the Atlantic".

If that quote sounds familiar its because it was uttered by British Prime Minister David Cameron during a visit to the former Soviet republic of Kazakhstan albeit from front to back. He told students at the Nazabeyev University in the capital Astana that:

"Our vision of the EU is that it should be a large trading and co-operating organisation that effectively stretches, as it were, from the Atlantic to the Urals".