Scarlett O'Hara Gone With the Wind outfit sells for $137,000 at Heritage Auctions 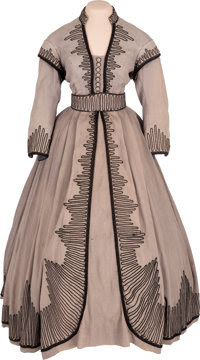 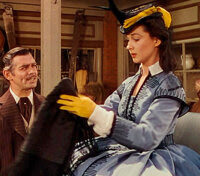 The iconic outfit worn by Vivian Leigh in her Academy Award-winning role as Scarlett O'Hara in Gone With the Wind sold for $137,000 April 18, 2015 at an Entertainment & Music Memorabilia Auction held by Heritage Auctions in Beverly Hills, California. The dress took top lot honors in an $890,000 auction of highlights of the James Tumblin Collection of Gone With the Wind costumes, props, and behind-the-scene rarities collected over the past 40 years. The winning bidder of the outfit, which is comprised of a jacket and a matching full skirt with a black zig-zag appliqué, wished to remain anonymous.

"The costumes from Gone With the Wind are much more than icons of Hollywood history - they are icons of American history," said Kathleen Guzman, managing director at Heritage Auctions, who auctioned the dress. "We are confident this collection is going to a wonderful home."

Tumblin, formerly in charge of the hair and makeup department at Universal Studios, began collecting rarities associated with the Academy Award-winning film Gone with the Wind in the early 1960s. He purchased the iconic outfit for just $20 from the Western Costume Company as it was being prepared for the trash bin.

A Large Straw Hat worn by Leigh at the moment her character Scarlett first laid eyes on the notorious Rhett Butler, as played by actor Clark Gable, ended at $52,500 following interest from 12 bidders. The cotton, mauve, purple, and white floral pattern blouse, Leigh wore as she defiantly declared "As God is my witness, I'll never be hungry again!" hammered for $32,500. And a Black Silk Bonnet worn by both Olivia De Havilland and Vivien Leigh in the film sold for $30,000, 10 times its pre-auction estimate.

Memorable costumes offered in the auction include Clark Gable's Period Gray Suit worn as Rhett Butler in the scene where he kicks down Scarlett's door, which sold for $55,000; a Confederate Soldier Uniform, worn by the actor Leslie Howard as Ashley Wilkes in the moving scene where he finds his way back to Tara Plantation, sold for $16,250; and a teal blue velvet riding habit worn by child actress Cammie King as Bonnie Blue Butler sold for $15,000 to a floor bidder.

Props from the film offered in the auction include the brass doorknob to the front door of Tara, the fictional plantation in the film, which sold for $8,125, and a Kerosene Lamp from Gone With the Wind - obtained by the owner of a bar across the street from the Metro-Goldwyn-Mayer studios as payment for an $8,000 tab racked up by a Prop Master - sold for $11,875.

The auction also included a large selection of memorabilia cherished by the film's stars: Hattie McDaniel's presentation script, signed by famed producer David O. Selznick sold for $28,750, against a $20,000 estimate. The movie secured McDaniel's place in Hollywood history as the first African American to win an Academy Award for her role as "Mammy" in the film.

Screenwriter Sidney Howard's Portable Noiseless Remington Typewriter used to generate the screenplay to "Gone With The Wind" for which he won an Academy Award for 'Best Writing, Screenplay' sold for $23,750, to lead a selection of behind-the-scene rarities. A Costume Design Sketch of Vivien Leigh signed by Walter Plunkett sold for $18,750 and Plunkett's Presentation Script, signed by Producer David O. Selznick, sold for $22,500.

Additional highlights include, but are not limited by:

A One-Sheet Poster from depicting the Atlanta Bazaar Scene, considered the rarest of the Gone With the Wind one-sheets: Realized: $20,000.