Via comment by Anonymous on From dream to nightmare as Obama’s immigration sch... 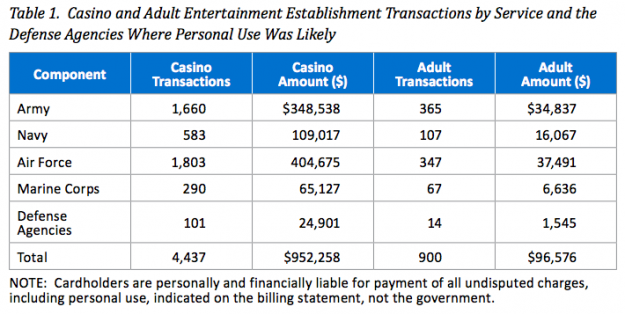 In the latest of many flagrant examples of how tax dollars are wasted, government-issued credit cards were used by Department of Defense (DOD) employees to make more than $4 million in personal charges, including at casinos and strip clubs.

During a one-year period the agency charged 20 million transactions for $3.4 billion on government credit cards, according to a DOD Inspector General report issued this month.

About $3.2 million of it was spent at casinos and nearly $1 million on personal expenses, including about $100,000 at strip clubs by 646 card holders. The casino charges were made through 4,437 transactions by 2,636 charge card holders, according to the report which breaks down expenditures by military branch.