Clear the Shelves of Confederate Stuff to Make Way for Commies 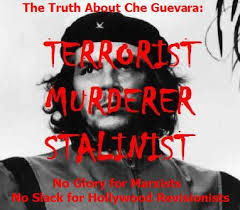 It was only a matter of hours after the controversy over South Carolina’s Confederate flag erupted that major retailers like Walmart, Amazon and eBay announced they would no longer sell Confederate flag merchandise. A spokesman for eBay called it a “contemporary symbol of divisiveness.” And we all know “divisiveness” is the worst.

Far worse than, say, murdering hundreds of millions of people like Nazis and Communists did. But what do you know? You can still order Nazi and Communist paraphernalia on Amazon and eBay. Want a Che Guevara tank top? Here’s your chance. Need a German WWII Reproduction Luftwaffe Officer’s Cap? It’s just one click away. How about a bust of Joseph Stalin? No one is defending slavery, but which is worse: slavery or mass murder?
Posted by Brock Townsend at Wednesday, June 24, 2015