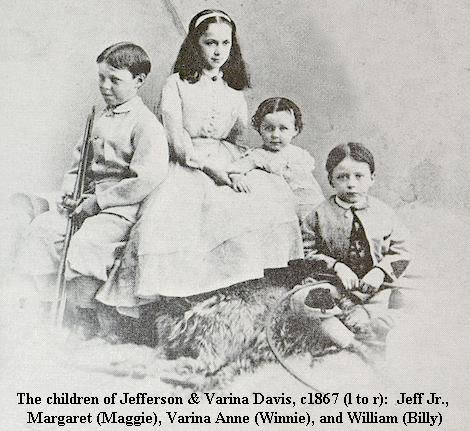 Truth crushed to the earth is truth still and like a seed will rise again.
---Jefferson Davis (1808 - 1889)
--------
“A question settled by violence or in disregard of law must remain unsettled forever.”
--------
"The contest is not over, the strife is not ended. It has only entered upon a new and enlarged arena.
---Address to the Mississippi legislature - 16 years after the wars end.
--------
"The principle for which we contend is bound to reassert itself, though it may be at another time and in another form."
------

"When certain sovereign and independent states form a union with limited powers for some general purpose, and any one or more of them, in the progress of time, suffer unjust and oppressive grievances for which there is no redress but in a withdrawal from the association, is such withdrawal an insurrection? If so, then of what advantage is a compact of union to states? Within the Union are oppressions and grievances; the attempt to go out brings war and subjugation. The ambitious and aggressive states obtain possession of the central authority which, having grown strong in the lapse of time, asserts its entire sovereignty over the states.

Whichever of them denies it and seeks to retire is declared to be guilty of insurrection, its citizens are stigmatized as "rebels", as if they revolted against a master, and a war of subjugation is begun. If this action is once tolerated, where will it end? Where is constitutional liberty? What strength is there in bills of rights-in limitation of power? What new hope for mankind is to be found in written constitutions, what remedy which did not exist under kings of emperors? If the doctrines thus announced by the government of the United States are conceded, then look through either end of the political telescope, and one sees only an empire, and the once famous Declaration of Independence trodden in the dust of as a "glittering generality," and the compact of the union denounced as a "flaunting lie".

Those who submit to such consequence without resistance are not worthy the liberties and rights to which they were born, and deserve to be made slaves. Such must be the verdict of mankind."

Speech on the Floor of the United States Senate
http://www.teachingamericanhistory.org/library/index.asp?document=491

"Jefferson Davis, in his farewell address to the United States Senate, expressed the sentiments of Virginia....when he said:

"Now sir, we are confusing language very much. Men speak of revolution; and when they say revolution, they mean blood. Our fathers meant nothing of the sort. When they spoke of revolution, they meant the inalienable right. When they declared as an inalienable right, the power of the people to abrogate and modify their form of government whenever it did not answer the ends for which it was established, they did not mean that they were to sustain that by brute force...Are we, in this age of civilization and political progress...are we to roll back the whole current of human thought and again return to the mere brute force which prevails between beasts of prey as the only method of settling questions between men?

"I tried all in my power to avert this war. I saw it coming, for twelve years I worked night and day to prevent it, but I could not. The North was mad and blind; it would not let us govern ourselves, and so the war came, and now it must go on till the last man of this generation falls in his tracks, and his children seize the musket and fight our battle, unless you acknowledge our right to self government. We are not fighting for slavery. We are fighting for Independence, and that, or extermination."
-- President Jefferson Davis, CSA
--------
“What do you propose, gentlemen of the free soil party? Do you propose to better the condition of the slave? Not at all. What then do you propose? You say you are opposed to the expansion of slavery. Is the slave to be benefited by it? Not at all. What then do you propose? It is not humanity that influences you in the position which you now occupy before the country. It is that you may have an opportunity of cheating us that you want to limit slave territory within circumscribed bounds. It is that you may have a majority in the Congress of the Untied States and convert the government into an engine of Northern aggrandizement. It is that your section may grow in power and prosperity upon treasures unjustly taken from the South, like the vampire bloated and gorged with the blood which it has secretly sucked from its victim. Your desire to weaken the political power of the Southern states, - and why? Because you want, by an unjust system of legislation, to promote the industry of the New England States, at the expense of the people of the South and their industry.”

--Senator Jefferson Davis 1860
--------
God forbid that the day should ever come when to be true to my constituents is to be hostile to the Union. If, sir, we have reached that hour in the progress of our institutions, it is past the age to which the Union should have lived. If we have got to the point when it is treason to the United States to protect the rights and interests of our constituents, I ask why should they longer be represented here? why longer remain a part of the Union? If there is a dominant party in this Union which can deny to us equality, and the rights we derive through the Constitution; if we are no longer the freemen our fathers left us; if we are to be crushed by the power of an unrestrained majority, this is not the Union for which the blood of the Revolution was shed; this is not the Union I was taught from my cradle to revere; this is not the Union in the service of which a large portion of my life has been passed; this is not the Union for which our fathers pledged their property, their lives, and sacred honor. No, sir, this would be a central Government, raised on the destruction of all the principles of the Constitution, and the first, the highest obligation of every man who has sworn to support that Constitution would be resistance to such usurpation. This is my position.

Jefferson Davis ~ In the Senate of the United States, June 27, 1850, on the Compromise Bill ~ Congressional Globe, p. 995-6
------------------------
34. “His moral qualities rose to the height of his genius. Hitherto men have been honoured when successful, but here is one who amid disaster went down to his grave, and those who were his companions in misfortune have assembled to do reverence to his memory. It is an honor to you who give as well as to him who receives, for, about the vulgar test, you show yourselves competent to judge between him who enjoys, and him who deserves, success…He sleeps with the thousands who fought under the same flag; he sleeps in the soil to him and to them the most dear. That flag was furled when there was no one to bear it; and we, a remnant of the living, are here to do homage to his peerless greatness, and there is an army of skeleton sentinels to keep watch over his grave.”