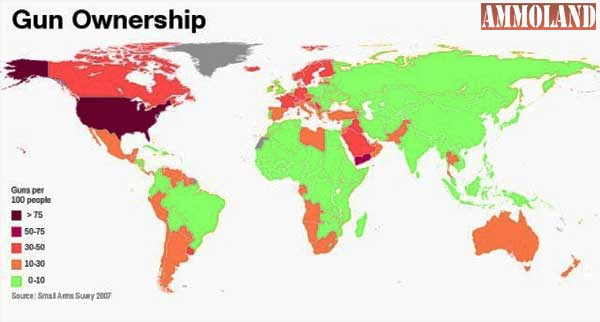 The debate on gun control is only gaining momentum. On Thursday, Senator Diane Feinstein outlined her plans to introduce sweeping legislation that includes fingerprinting and registration of all those who currently own so-called semi-automatic “assault” weapons.

Those in favor of a total ban on firearms often point to countries like England and Australia where firearms are banned or virtually impossible to possess. A look into the statistics might offer some clarity, though, about how safe such a move actually makes a country.

Since 1998, John Lott’s seminal work More Guns, Less Crime has been used to show that areas with the highest gun ownership in America experience the least crime on a per capita basis.
It now appears that what Lott discovered as true for the U.S.A. is true for the world as well.