How Sundays Were Kept 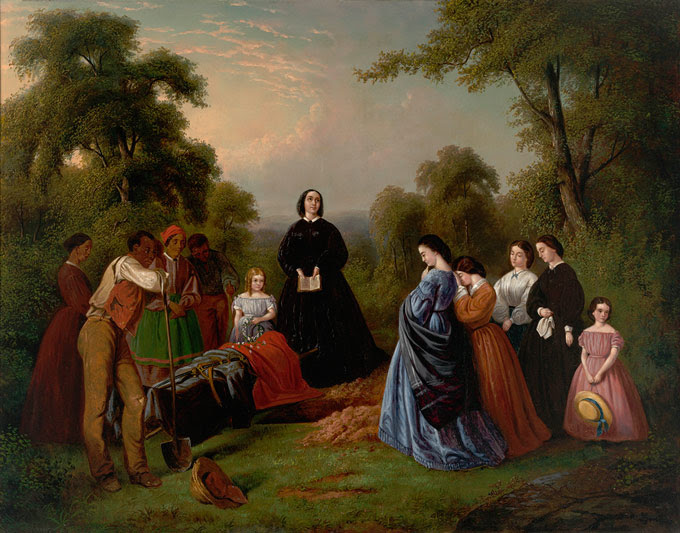 The Burial of Latané was one of the most famous Lost Cause images of the American Civil War (1861–1865). Painted by Virginian William D. Washington

The passage below describes how Sunday was kept in Wilmington, North Carolina about a century ago, when religious faith commanded better attention than today. The painting that captivated Emma (below) was of the burial of Captain William Latane, the only casualty of Stuart’s ride around McClellan’s army in the Spring of 1862. His body was seized by the enemy, who refused to allow a clergyman to pass through their lines to officiate at the burial. The lady holding the Bible described below was Mrs. Willoughby Newton, who read the funeral service.
Bernhard Thuersam, www.Circa1865.com   The Great American Political Divide

How Sundays Were Kept

“Preparations for Sunday started on Saturday in our house; the kitchen was a-hustle with the making of cake, bread, puddings and pies. My Mother did not believe in making her servant cook anything on Sunday that could be prepared the day before. We children were made to study our Sunday School lessons and the catechism and to take a more thorough and inspected hot bath than on other days.

In our home we generally got up on Sundays an hour later than week days. We were always eager for our breakfast as we knew we would have salt mackerel and hominy. The mackerel had been soaked overnight and when cooked was served with cut up hard boiled eggs and butter poured on top.

And that was real butter — no substitute — we did not know there was such a commodity. The hominy had been cooked and stirred for an hour. There were biscuits and coffee and cambric tea for the children. And in season we had canteloupes and oranges—fruit juices were unknown.

After a leisurely meal the family dispersed until Church time, some to read the papers. We smaller children generally followed Mama to look at her garden, for my mother always had flowers in bloom, regardless of season, and Sunday morning was always the time to show them off and talk about them.

If there was time before church we would run next door to speak to Grandpa Worth, but only for a minute because we had to be at Church on time and we walked . . . as there were few pavements we had to pick the best side to walk on, for we had our Sunday-go-to-meeting shoes to keep clean.

After Sunday dinner the older members of the family had their naps and woe to any of us that played the piano or gramophone during those hours. Then we had to get ready for Sunday School at four o’clock.

By the time we reached home it was almost 5:00 p.m. But as we sat listening to our elders talking about things we were not interested in, we had one unfailing source of wonder. We sat facing a picture which has been almost a part of our lives. I have it to this day in a place of honor in my living room — “The Burial of Latane.”

It told us a story of a young Confederate officer’s burial. Weeping young women stood there. There was the grave digger leaning on his spade ready. There was no clergyman to read the service. A dignified woman dressed in black held an open book and was ready to do what she could for service. Two lovely children stood near and the faithful colored servants were in the background. We read much into the picture and have always loved it.”