Officer In D.C. Metropolitan Police Department Pointed Unloaded Gun At Head Of Another Officer And Dry Fired The Gun On Orders From His Sergeant 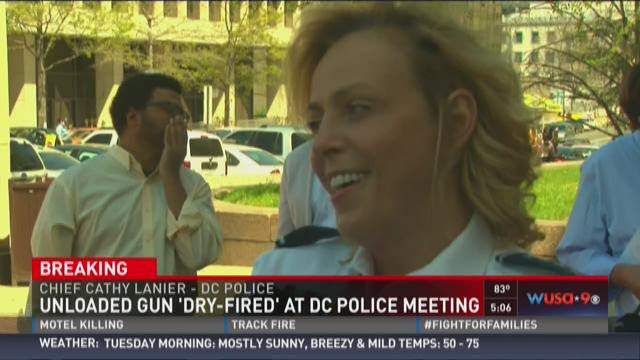 An officer in the Metropolitan Police Department’s first district “dry-fired” an unloaded weapon at the head of another officer during a roll-call meeting on Saturday afternoon, possibly under orders from a sergeant as part of a training exercise, four MPD sources tell WUSA9.

Those sources say a Sergeant later told officers in the room that they had secretly ordered the officer to unload his weapon and then pretend to fire on his colleague as part of a “training exercise” on situational awareness. The officer then pulled the trigger of the unloaded weapon while pointing it at the head of an officer until it audibly clicked, the sources say.

Both the officer who allegedly fired the weapon and the sergeant who allegedly ordered him are assigned to regular duties, pending an internal affairs investigation, MPD spokesman Sean Hickman tells WUSA9.

“I can tell you there are about seven different versions of the incident that are out there,” MPD Chief Cathy Lanier told reporters on Monday. “I’m not sure which or how many of those that you’ve heard, but I prefer to wait until I see some facts and some direct statements of what happened before I make a judgment.”