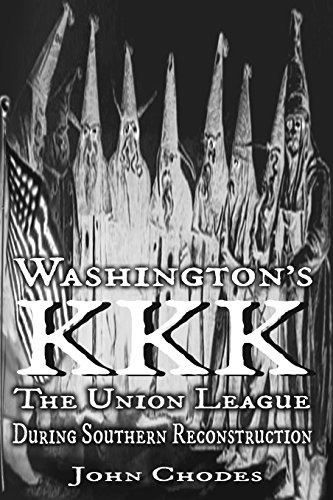 "Union League" From The Encyclopedia Britannica


THIS BOOK TELLS THE SHOCKING STORY of this long forgotten chapter in American history—the story of THE UNION LEAGUE, WASHINGTON’S KKK. The “official” version of Southern Reconstruction is that there was a reign of terror — a systematic murder and intimidation by the “white Southern ruling class” who were determined to keep free people of colour in a virtual state of slavery. The real picture is a good deal more complicated. One can find plenty of material about conflict, intimidation, and killing in America during the period 1865-1877; but the Marxist class conflict formulary of history — also known as Political Correctness—takes for granted as fact what is clearly partisan propaganda of the time.

They never ask the essential factual and moral question: Who initiated violence? John Chodes shows that the violence was begun by the Republicans through the establishment of the Union League. The Union League was a Northern organisation with the mission of maintaining the illegal and undemocratic control of the Republican Party in the South. Its mobs of Black “militia” led by Carpetbaggers engaged in intimidation, theft, harassment of the innocent, and murder. They deliberately provoked violent response. Their coercion was directed not only at whites, but towards the freedmen who refused to support the Republican regime. In other words, the Union League used the methods of the Ku Klux Klan before the Klan came into existence — the Klan before the Klan! *** This title is enrolled in Kindle MatchBook. FREE if print edition is purchased on Amazon.
Posted by Brock Townsend at Sunday, August 14, 2016