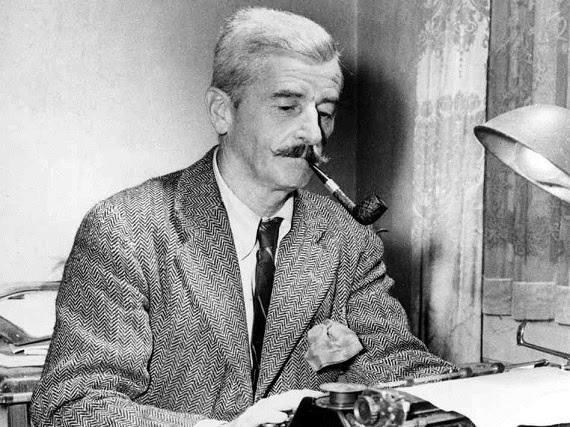 Myself, I will stand during the Pledge out of politeness to the as-yet unenlightened.  No repeating the words or hands over the heart.  Like our forebears, I do  not  owe  unquestioning allegiance to a flag or a government and will not swear such.   Like them,  I will swear to “uphold  the Constitution,”  which is what free men  reasonably ought to do.

Exactly what I do at each monthly SCV meeting.

************************
William Faulkner of Mississippi was the greatest writer produced by the United States in the 20th century.  His craft was fiction, but like any great writer he was a better historian and  philosopher  than  most  who  wear  those  labels .  I  was  reminded  of a nonfiction piece of Faulkner’s recently when the hoopla erupted about some of the pampered and petted gladiators of the commercial sports industry trashing the national anthem.  This article was Faulkner’s sole contribution to Sports Illustrated (January 1955) and was called “An Innocent at Ringside.”

In this essay Faulkner writes about his first viewing of an ice hockey match, which he describes beautifully and inimitably.  Then he reflects on the preoccupation of Americans with sports spectacles,  viewed  while  sitting  in  rain-proofed and often cold-proofed comfort, in comparison with our ancestors’ hunting, fishing, sailing.  He (in the role of Innocent) wondered:

“just  what a professional hockey-match, whose purpose is to make a decent and reasonable profit for  its owners, had to do with our National Anthem.