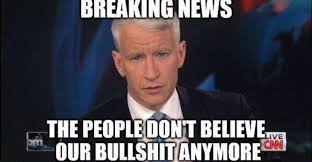 “It was like a f–ing firing squad,” one source said of the encounter.

“Trump started with [CNN chief] Jeff Zucker and said ‘I hate your network, everyone at CNN is a liar and you should be ashamed,’ ” the source said.

“The meeting was a total disaster. The TV execs and anchors went in there thinking they would be discussing the access they would get to the Trump administration, but instead they got a Trump-style dressing down,” the source added.

A second source confirmed the fireworks.