How the Election Split France 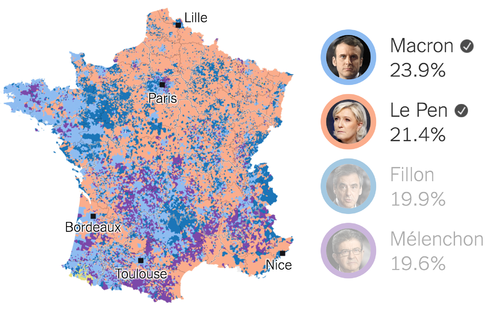 Two outsiders, Emmanuel Macron and Marine Le Pen, advanced in France’s presidential election on Sunday, setting up a runoff that could decide the future of the European Union. Election results are as of 4 a.m. Paris time.
The two winners will rely on starkly different bases of support in the runoff on May 7.

Ms. Le Pen captured areas with high unemployment and low wages, where she campaigned on pledges to stop immigration and renegotiate France’s relationship with the European Union.

Mr. Macron dominated in economically dynamic areas and large cities, like Paris and Bordeaux, where his pro-business and socially progressive platform resonated with educated voters.