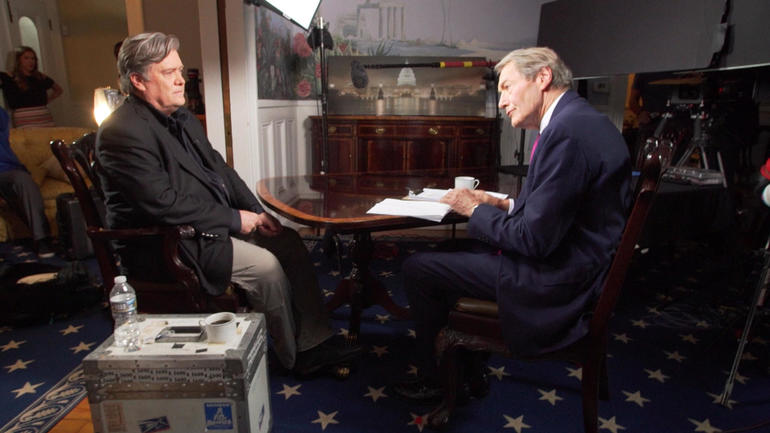 “I don’t think [Trump] needs The Washington Post, and The New York Times and CBS News,” Bannon said during a wide-ranging "60 Minutes" interview that aired Sunday night. “And I don’t believe that he thinks they’re looking out [for] what’s in his best interest, okay? He’s not going to believe that. I don’t believe that. And you don’t believe that, okay? This is just another standard in judgment that you rain upon him in the effort to destroy Donald Trump.”


In the interview on 60 Minutes that ran last night, former White House chief of staff Steve Bannon aired some dirty laundry as he railed against the GOP establishment.  “The Republican establishment is trying to nullify the 2016 election.” Bannon continued, specifically naming Senate Majority Leader Mitch McConnel (R-KY), who told the president that he didn’t want to “hear any more of this ‘drain the swamp’ talk.”

Bannon:  “They do not want Donald Trump’s populist, economic nationalist agenda to be implemented. It’s very obvious.” Bannon goes on to predict that if the Trump agenda is able to move forward — that is, if it’s not continually blocked by the Republican establishment — then the GOP will gain “six or seven Senate seats” in the 2018 mid-terms and that Trump will win reelection by a landslide in 2020.

Bannon also said that Hillary Clinton wasn’t that smart, and that the 2020 election will be between left-wing populism and right-wing populism.
Posted by Brock Townsend at Monday, September 11, 2017