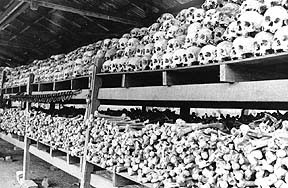 The Washington Times published an article about the effort to hold "climate change deniers" legally culpable for their views. It is just another case of never let truth or science get in the way of the religion of anthropogenic global warming.

Hurricanes Harvey and Irma were going to incite the collectivists in the global warming cult; that was a given. But it illuminates the current state of collectivism in the liberal solar system, which is: it is okay to attack someone they consider a "Nazi" and the definition of Nazi might be anything they find contrary to the collectivist mantra; Ben Shapiro, by his very existence, is guilty of rhetorical thuggery whenever he speaks against the collectivist agenda and those who find enough science to doubt the anthropogenic source of global warming can be jailed.

What we see is that the collectivist liberals are in the process of criminalizing opposition to the tenets of their death cult, paving the way for them to engage in genocide. As drastic or sensationalized as that seems, it is verifiable from the origins of every genocide ever committed.