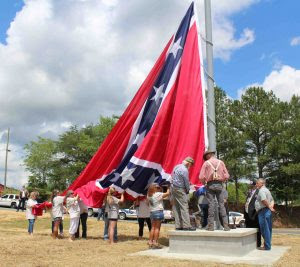 With the sound of period cannons and rifles, the garrison sized Confederate Battle Flag was dedicated and raised to the top of a 100-foot flagpole on Saturday, May 26.  The flag and two statues were placed on private land and funded by the Sons of Confederate Veterans and the Order of the Rose. It is located approximately 3 miles west of Double Springs on Highway 278. In speeches preceding the raising of the flag, it was pointed out that many of the Confederate monuments have been removed and this flag and monuments are in effect, a response to that movement to remove Civil War monuments found offensive to some. The dedication was for the men from Winston County who fought for the south.