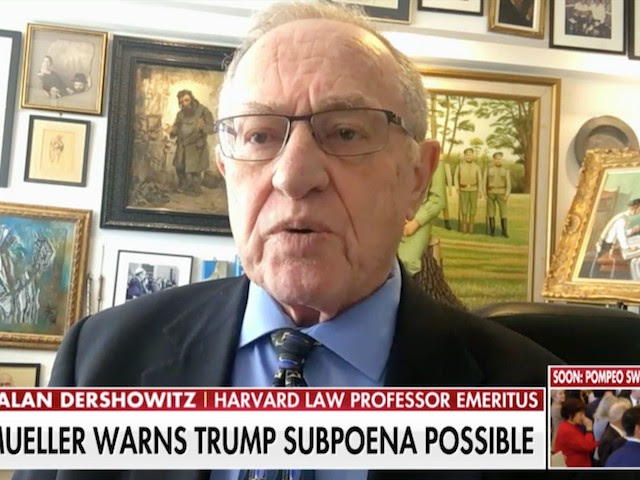 Dershowitz said, “Mueller has the ultimate card in his hand, the subpoena card. Because you subpoena the president, he has to go in front of the grand jury without his lawyer, without any opportunity to limit the questions.”

He continued, “But this gives the president some options, too. He can challenge the subpoena in court. He can go to the federal district court, the court of appeals, the United States Supreme Court. He can argue you can’t subpoena a president in a criminal case in front of a grand jury. He would possibly lose that broad issue. He can then argue you can’t ask a president why he engaged in acts that are authorized under Article II of the Constitution. He might well win that argument. Then he might argue you can’t ask me questions that go beyond the scope of the special counsel’s authority, namely to business dealings before he became president of the United States, and he may win or may lose that. It’s unclear.”

He added, “I think he’d be in a better position challenging this legally than sitting down with the special counsel and answering that list of 40-some-odd questions that are so open-ended, so vague and so general.”
Posted by Brock Townsend at Wednesday, May 02, 2018